As for those who say that the begotten is in its nature unlike the unbegotten, let them learn from the example of Adam and Abel not to talk nonsense. For Adam himself was not begotten according to the natural generation of men; but Abel was begotten of Adam. Now, surely, he who was never begotten is called unbegotten, and he who came into being by generation is called begotten; yet the fact that he was not begotten did not hinder Adam from being a man, nor did the generation of Abel make him at all different from man’s nature, but both the one and the other were men, although the one existed by being begotten, and the other without generation. So in the case of our statements as to the Divine nature, the fact of not being begotten, and that of being begotten, produce no diversity of nature, but, just as in the case of Adam and Abel the manhood is one, so is the Godhead one in the case of the Father and the Son.

But since they bring forward as a proof, according to their ideas, of the created nature of the Holy Spirit, that utterance of the prophet, which says, 'He that stablisheth the thunder and createth the spirit, and declareth unto man His Christ,' we must consider this, that the prophet speaks of the creation of another Spirit, in the stablishing of the thunder, and not of the Holy Spirit. For the name of 'thunder' is given in mystical language to the Gospel. Those, then, in whom arises firm and unshaken faith in the Gospel, pass from being flesh to become spirit, as the Lord says, 'That which is born of the flesh is flesh, and that which is born of the Spirit is spirit.' It is God, then, Who by stablishing the voice of the Gospel makes the believer spirit: and he who is born of the Spirit and made spirit by such thunder, 'declares' Christ; as the Apostle says, 'No man can say that Jesus Christ is Lord but by the Holy Spirit.' 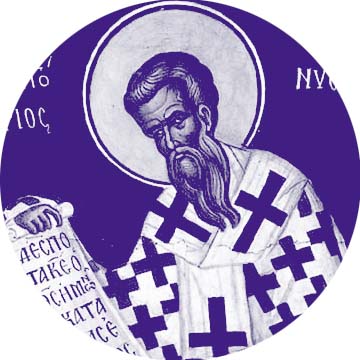 Gregory of Nyssa (c335 – c395) was Bishop of Nyssa in modern day Turkey. He was an important theologian in his day, and with Gregory Nazianzus and Basil of Caesarea, is one of the 'Cappadocian Fathers'.