Sam, a retired missionary, was planting a church on the coast of British Columbia north of Vancouver, and two of us on a summer mission were helping with the building consttruction. We ate breakfast with Sam each morning in his beachside cottage before starting work. On each occasion we managed to trigger a delightful discourse of biblical truth. As often as not he’d start with quotes from Genesis and end up in Revelation after touching down four or five times in between.

Sam’s Bible knowledge amazed me. His Scripture awareness had penetrated all aspects of his life, not in a rote fashion, but in a way that seemed accessible and practical. I asked how he gained it and he laughed.

‘How much reading—how do you approach it?’

‘I try to get through it at least two or three times a year.’

I almost dropped my coffee. He had been reading at that pace for most of his Christian life, about fifty years!

The challenge captured me. Within two months I finished my first Bible read-through and I was left in awe of God’s greatness, holiness, and redemptive love. I discovered the vast and penetrating strength of his personality as a compelling ribbon tightly wound through every book of the two testaments. It was the beginning of my pursuit of God, a pursuit that makes what he has to say to us—my ‘listening’—the first priority. And I’ve never turned back!

Some years later I discovered that such intensive Bible reading would work as strongly with others as it had with me. John was my Army roommate. He was a believer, but lacked any muscle in his faith. One morning, before I went on duty, he complained that he was being badgered for his faith while I was somehow exempt.

‘Johnny,’ I remember steaming, ‘it’s because you don’t stand for anything! You say you believe in God, but you never spend any time with him.’

I asked him why he scarcely read his Bible. In fact, had he ever read the Bible through?

When I came back for lunch at noon, he was finishing Genesis; by that evening he had almost made it through Exodus. Soon he was carrying his Bible to work. At breaks he would read segments to his amazed military police friends. He finished reading the whole Bible by the end of the second month.

John not only gained new credibility with his friends—and ended the badgering—but also helped to stimulate the young adults fellowship at the church we attended. He went on to Bible college after the Army. At the end of our two years in the service we talked about our shared Bible reading. Through it, he said, ‘I fell in love with God.’

I’ve since adopted a team-reading approach and have read through the Bible with almost a dozen partners. That started at a church in Boise when I invited a new believer, Way, to take it up as a means to grow in his faith. His life prospered. Soon others who saw the change imitated our read-through, though it was never formally promoted.

Two weeks ago I began another partnership read-through. Chris, my fellow-reader, is a 19-year-old in the college ministry I lead. He grew up in a Christian home, but until six months ago was generally indifferent to spiritual concerns. After participating in an early morning Bible study for five weeks, he asked for another study and I proposed a read-through together.

The rules are simple. We selected a date for completing the project (in this case, four months from our commencement). We meet Tuesday morning for an hour. We chat for about ten minutes and then begin to read verses aloud that we’ve underlined in our reading for the week—usually covering different sections of the Bible depending on our individual pace. Whoever gets to read first has ten minutes to read as many verses as possible before passing the baton to the partner. We don’t explain our selections or try to apply the verses. We just read ‘verbatim’ the whole time. We never cover all the verses we’ve underlined, but that doesn’t matter. We just stop whenever our time ends. Then we share requests and pray. It may not sound dramatic but it is the highlight of my week.

The purpose is to read the Bible for flow in the same way we might read any good book: whenever the time offers itself. That way we look at a free evening or Saturday morning as a ‘chance’ to read, not as a duty. It quickly becomes a new appetite if we give the Spirit some room to work. Last Thursday, for example, Chris read for five hours, like he would if he had a great book and some time to spare. Which, of course, he had on both counts!

As I mentioned already, we read at a personal pace, so we rarely share verses from the same Bible sections. This has never been a problem. In fact, it’s useful because it gives a double exposure to every section of the Bible.

Underlining is essential for our concentration and serves as our only ‘homework.’ So, in our meetings we just read our selected passages without any need to teach or comment. Yet our verse selections are often revealing.

We also picked a completion date that would challenge us. It takes up some of our discretionary time, of course, but my daily reading usually involves just thirty minutes—as long as newspaper reading. I also look for longer reading stretches whenever I can, usually on a weekend, in order to catch more of the ‘flow.’ I enjoy those times most. As an important note, I encourage first-time readers to skim sections that are repetitive or technical—Old Testament law lists, genealogies and the like. Follow the narrative for now and come back for those specifics later on.

• Isn’t the Bible too diverse and complex for an untrained reader? No, especially if a young Christian has a more mature believer to answer some of the basic questions that may arise. In our first exposures to learning anything, in school, or on the job, we’re usually confronted with complexity. Nevertheless, we begin to find principles that become points of reference for further understanding. The task of a teacher or helper is to direct the learner toward principles that give order to complexity. These kinds of principles emerge naturally in the informal talks between partners.

• What’s the best age or ability level for this approach? One junior-high youth pastor used this method to help 24 of his youth read the New Testament during the summer. He reserved a ‘report’ period during each Wednesday meeting when the students would share what they had underlined. Everyone finished on time and with enthusiasm. On another occasion after I spoke about Read-Throughs to a church family camp I had two fourteen-year-old boys commit to try it. They called me later to say they had completed the entire Bible in just one month . . . and loved it!

• What if I’m not a good reader? My own reading is paced by a CD player, so I’m usually reading at a ‘talking’ pace. And along that line I once had a partner with a reading disorder. I bought audio tapes of the Bible for him to listen to while he marked the verses that caught his attention on a printed text. His reading skills also improved dramatically.

Bible discipleship works because, I believe, it’s Christ’s preferred approach. Jesus gave clear directions for his followers to ‘abide’ in his word (John 8:31). To accept his instruction at face value and to apply it through intensive Bible reading assures that Christians have a direct exposure to Scripture; it’s crucial to spiritual growth.

Nick and his family left to Asia as missionaries this past August. Years earlier Nick had become a Christian just when Way and I were starting our read-through, so he and Way began to meet also. Nick assumed that all Christians read through the Bible in this way. His continued appetite for Scripture led to formal theological training. He still has this avid appetite, and now it’s overflowing to others.

Bible discipleship also demonstrates the love of Christ. We need to show new believers how our bonding into the body of Christ works. This happens when two people are joined in high-commitment fellowship through the shared, vigorous pursuit of God. When the partners meet together after having read substantial sections of the Bible in a week—realizing that the Spirit has been present to do his own ‘underlining’ in their lives—there will be real growth in biblical love that expresses itself in personal vulnerability and accountability, prayer, and friendship.

Paul assured the Ephesian elders that they had been given the ‘whole will of God’ (Acts 20:27) in his ministry to them. The Bible now serves as our access to God’s will. In a survey of the Bible, the Christian begins to gain an overview that aids his study of any given text. In most instances the writers of the New Testament assumed that their readers had a knowledge of the Old Testament. It’s important for contemporary Christians to be equipped to respond to that assumption.

Sam’s mark on my life is eternal, not because of any exceptional wisdom, but because he was a channel of the living Word of God. Jesus told the woman at the well about the very principle that Sam shared with me: ‘Whoever drinks the water I give him will never thirst. Indeed, the water I give him will become in him a spring of water welling up to eternal life’ (John 4:13). Isn’t it time for us to read the Bible vigorously, steadily, and fully? 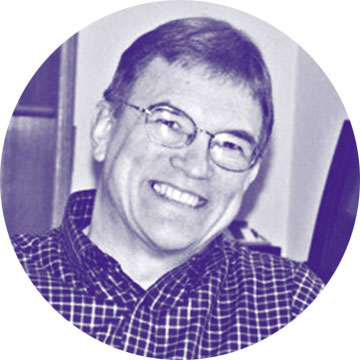 Ronald N. Frost is a pastoral care consultant to missionaries with Barnabas International and a mentor for Cor Deo.