You cannot begin your theology without your doctrine of God – all else is because God is. Everything exists by virtue of Him, out of Him, for Him, and in relationship with Him. Whatever you say about Him has ramifications for all of reality. Misunderstand God and you misunderstand everything.

Ok, but where do you begin your doctrine of God?

It is helpful to understand what Athanasius considered to be the most crucial point in his disagreements with the heretic Arius:

'Therefore it is more pious and more accurate to signify God from the Son and call Him Father, than to name Him from His works only and call Him Unoriginate.'

To put this another way, we ought first to consider God as Trinity before we consider Him as Creator.

The issue can be seen in sharp relief when we understand exactly what Arius believed. He wrote this in his Letter to Alexander of Alexandria:

'Our faith, from our ancestors, which we have learned also from you is this. We know one God – alone unbegotten, alone everlasting, alone without beginning… who begot an only-begotten Son before eternal times, through whom he made the ages and everything.'

Arius moves from ‘uncreated Creator’ to God’s Begetting-Begotten relationships with great ease and one wonders how many Christians, even Christian ministers, would today spot this as the grave heresy it most certainly is.

The problem here is that the being of God is defined in advance of a consideration of the only-begotten Son. And so, from the outset, Christ has been defined out of full deity! There is no way you could confess Jesus as ‘fully God’ once the definition of God is stated as ‘alone unbegotten.’ The Father and the Son cannot be, for Arius, of one being. They are of different orders of being – the Father defined as on one plane (the unbegotten plane), the Son is on another (the begotten – and, for Arius, created – plane).

No matter how much Arius protested that the Father and the Son were of ‘like being’ he had actually placed them on opposite sides of the line which he had drawn to separate God from everything else. For Arius the Unoriginate-originate distinction was the ultimate demarcation of full deity from all else. And the Son was on the other side of that line.

The very heart of the gospel is threatened here. With Arius we have a fundamental disjunction between who Jesus is and who the Father is. When Jesus claims in John 10, ‘I and the Father are one’ this is meant to reassure His hearers that what they hear Him saying and what they see Him doing are the very words and works of God. To see and lay hold of Jesus is to see and lay hold of the Father. For Arius to drive a wedge between this one-ness means that 1) Christ’s revelation is not actually the revelation of God and 2) Christ’s salvation is not actually the salvation of God. To see and hear and trust Jesus is still to be short of seeing, hearing and trusting God. We are, ultimately, left in the dark – for revelation and for salvation.

And all this, according to Athanasius, is because Arius has named God from His works rather than naming Him from His Son. That is, he has begun with God as Creator and not with God as Trinity. And that means that Arius has a fundamentally different God from Athanasius.

And all this, according to Athanasius, is because Arius has named God from His works rather than naming Him from His Son. That is, he has begun with God as Creator and not with God as Trinity. And that means that Arius has a fundamentally different God from Athanasius.

To show this, imagine two scenarios:

Arius sits down at the table with Athanasius and says ‘God is definitionally unbegotten, do you agree?’  Athanasius says ‘No!  We do not define God from His works, calling Him Maker and then try to map those same, philosophically derived attributes onto Jesus (and the Spirit) to produce 'a Trinity'!  Arius, you and I do not simply disagree about the identity of Jesus.  We fundamentally disagree about God.  You begin with uncreated Creator and therefore can never come to understand Jesus.  Because you do not begin with Jesus you simply cannot know the first thing about God.”

Thus Athanasian trinitarianism – orthodox Nicene trinitarianism – is not, finally, about seeking to secure the deity of the Son (Arius believed Jesus was divine). It was even more about ensuring a Christian doctrine of God. Agreement on the deity of the Son is not actually a later stage in the argument about God. We do not first agree on some kind of God and then introduce His Son. Any concept of the one God that does not from the outset include the mutual relations of Father-Son, begetting-begotten etc, bears no relation to the living God. It is Arian. Heresy.

Thus we return to Athanasius’ plea: do not begin from God’s works and call Him Maker. Begin with His Son and call Him Father!

‘We believe in one God, The Father Almighty, Maker…’

Before there was a world, there was God. And this God was, is and ever shall be the Father pouring life and love into His Son by the Spirit. Before we seek to know God in any other way we must understand Him as He is in, with and for Himself, that is, in His triune relationships.

If you don’t follow this method, here are 12 disastrous implications:

1) You will never get to a Nicene trinity – you must deny ‘God from God’ – a begotten deity.

2) You will make God both dependent on creation and shut out from it (i.e. 'Creator' needs a creation, but is defined in opposition to it).

4) Faith then becomes, not a laying hold of God, but of intermediary pledges from the unknown God.

5) Assurance becomes impossible – the hidden and unreachable God determines all.

6) Salvation becomes not a participation in God but a status conferred external to Him.

7) Apologetics becomes the invitation to non-Christians to also name God from His works.

8) Proclaiming Christ entails the impossible task of squeezing Jesus into a pre-formed deistic doctrine of God.

9) Christology will become the riddle of fitting the uncaused cause ('deity') with a very conditioned Jesus ('humanity') – i.e. you’ll tend towards Nestorianism.

10) You will define God’s Glory in terms of self-sufficiency – making Him the most self-absorbed Being in the universe rather than the most self-giving.

12) You will consider 'Glorifying God' to mean ‘what we give to Him’ – our worship etc (works!) – rather than receiving His life given to us (faith!).

And all because we haven’t begun with Jesus – our God from God. 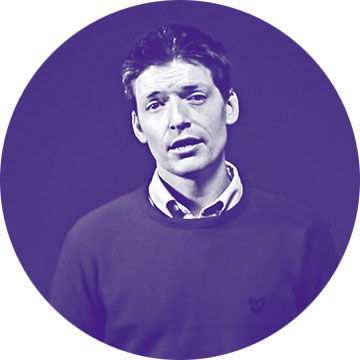 Glen Scrivener is the Director and Evangelist at Speak Life. He's teaches at Union School of Theology and has written a number of books including 321:The Story of God, the World and You and Reading Between the Lines.