Lying in bed would be an altogether perfect and supreme experience if only one had a coloured pencil long enough to draw on the ceiling. This, however, is not generally a part of the domestic apparatus on the premises. I think myself that the thing might be managed with several pails of Aspinall and a broom. Only if one worked in a really sweeping and masterly way, and laid on the colour in great washes, it might drip down again on one’s face in floods of rich and mingled colour like some strange fairy rain; and that would have its disadvantages. I am afraid it would be necessary to stick to black and white in this form of artistic composition. To that purpose, indeed, the white ceiling would be of the greatest possible use; in fact, it is the only use I think of a white ceiling being put to.

But for the beautiful experiment of lying in bed I might never have discovered it. For years I have been looking for some blank spaces in a modern house to draw on. Paper is much too small for any really allegorical design; as Cyrano de Bergerac says, “Il me faut des géants” [“I need giants”]. But when I tried to find these fine clear spaces in the modern rooms such as we all live in I was continually disappointed. I found an endless pattern and complication of small objects hung like a curtain of fine links between me and my desire. I examined the walls; I found them to my surprise to be already covered with wallpaper, and I found the wallpaper to be already covered with uninteresting images, all bearing a ridiculous resemblance to each other. I could not understand why one arbitrary symbol (a symbol apparently entirely devoid of any religious or philosophical significance) should thus be sprinkled all over my nice walls like a sort of small-pox. The Bible must be referring to wallpapers, I think, when it says, “Use not vain repetitions, as the Gentiles do.” I found the Turkey carpet a mass of unmeaning colours, rather like the Turkish Empire, or like the sweetmeat called Turkish Delight. I do not exactly know what Turkish Delight really is; but I suppose it is Macedonian Massacres. Everywhere that I went forlornly, with my pencil or my paint brush, I found that others had unaccountably been before me, spoiling the walls, the curtains, and the furniture with their childish and barbaric designs.

Nowhere did I find a really clear space for sketching until this occasion when I prolonged beyond the proper limit the process of lying on my back in bed. Then the light of that white heaven broke upon my vision, that breadth of mere white which is indeed almost the definition of Paradise, since it means purity and also means freedom. But alas! like all heavens, now that it is seen it is found to be unattainable; it looks more austere and more distant than the blue sky outside the window. For my proposal to paint on it with the bristly end of a broom has been discouraged—never mind by whom; by a person debarred from all political rights—and even my minor proposal to put the other end of the broom into the kitchen fire and turn it to charcoal has not been conceded. Yet I am certain that it was from persons in my position that all the original inspiration came for covering the ceilings of palaces and cathedrals with a riot of fallen angels or victorious gods. I am sure that it was only because Michael Angelo was engaged in the ancient and honourable occupation of lying in bed that he ever realized how the roof of the Sistine Chapel might be made into an awful imitation of a divine drama that could only be acted in the heavens.

The tone now commonly taken toward the practice of lying in bed is hypocritical and unhealthy. Of all the marks of modernity that seem to mean a kind of decadence, there is none more menacing and dangerous than the exultation of very small and secondary matters of conduct at the expense of very great and primary ones, at the expense of eternal ties and tragic human morality. If there is one thing worse than the modern weakening of major morals, it is the modern strengthening of minor morals. Thus it is considered more withering to accuse a man of bad taste than of bad ethics. Cleanliness is not next to godliness nowadays, for cleanliness is made essential and godliness is regarded as an offence. A playwright can attack the institution of marriage so long as he does not misrepresent the manners of society, and I have met Ibsenite pessimists who thought it wrong to take beer but right to take prussic acid. Especially this is so in matters of hygiene; notably such matters as lying in bed. Instead of being regarded, as it ought to be, as a matter of personal convenience and adjustment, it has come to be regarded by many as if it were a part of essential morals to get up early in the morning. It is upon the whole part of practical wisdom; but there is nothing good about it or bad about its opposite.

Misers get up early in the morning; and burglars, I am informed, get up the night before. It is the great peril of our society that all its mechanisms may grow more fixed while its spirit grows more fickle. A man’s minor actions and arrangements ought to be free, flexible, creative; the things that should be unchangeable are his principles, his ideals. But with us the reverse is true; our views change constantly; but our lunch does not change. Now, I should like men to have strong and rooted conceptions, but as for their lunch, let them have it sometimes in the garden, sometimes in bed, sometimes on the roof, sometimes in the top of a tree. Let them argue from the same first principles, but let them do it in a bed, or a boat, or a balloon. This alarming growth of good habits really means a too great emphasis on those virtues which mere custom can ensure, it means too little emphasis on those virtues which custom can never quite ensure, sudden and splendid virtues of inspired pity or of inspired candour. If ever that abrupt appeal is made to us we may fail. A man can get used to getting up at five o’clock in the morning. A man cannot very well get used to being burnt for his opinions; the first experiment is commonly fatal. Let us pay a little more attention to these possibilities of the heroic and unexpected. I dare say that when I get out of this bed I shall do some deed of an almost terrible virtue.

For those who study the great art of lying in bed there is one emphatic caution to be added. Even for those who can do their work in bed (like journalists), still more for those whose work cannot be done in bed (as, for example, the professional harpooners of whales), it is obvious that the indulgence must be very occasional. But that is not the caution I mean. The caution is this: if you do lie in bed, be sure you do it without any reason or justification at all. I do not speak, of course, of the seriously sick. But if a healthy man lies in bed, let him do it without a rag of excuse; then he will get up a healthy man. If he does it for some secondary hygienic reason, if he has some scientific explanation, he may get up a hypochondriac. 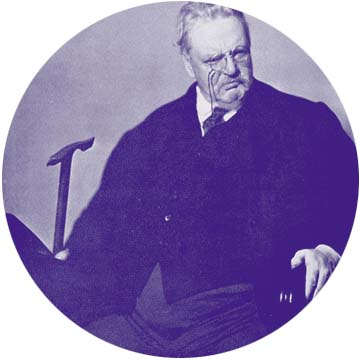