This article is an excerpt from Suffering and Singing: Psalm 44: Knowing God’s Love in the Pain and Despair, the fourth in Union's series of short, friendly theological books in partnership with 10ofThose. You can buy it online today here.

Perhaps they looked at their instruments stacked against walls, avoiding one another’s eyes. What do you do when your heart is broken, when your soul is shrivelled and dying of thirst? What do you sing when the news is of the slain, the defeats and the shame of God’s people?

The sons of Korah knew suffering. It was underlined in their name. Korah was not their dad (he was a distant ancestor) but they were named for him because he was famous – notorious. He was the cousin of Moses and Aaron (Exodus 6:18–24), which made his rebellion against their God-given authority all the worse. In Numbers 16 he demanded an equal share in the leadership of God’s people, and he was judged by God with decisive speed. The Lord caused the ground to open and Korah and all his family went down to their graves alive.

But in Numbers 26:11 Moses wrote simply: ‘The line of Korah, however, did not die out.’ Whether they were spared or brought back from the grave by the Lord we are not told, but they are the ones who lived when they should have died. They were redeemed from death. They are like us Christians, who should have died and yet live through the wonder and power of the resurrection of Jesus Christ.

Their history, their title as sons of Korah, was a mark of shame and suffering and of the forgiveness and love of the Lord. They knew the suffering of God’s judgment and they knew the wonder of his grace.

They also knew the heights, the glory days of Israel. They were chosen by David, the great king of Israel, the slayer of the giant Goliath, and a man after God’s own heart. They were appointed to be the singers (1 Chronicles 25:1-8; Heman was a descendent of Korah, as we see from the title of Psalm 88) and gatekeepers (1 Chronicles 26:1) in the temple of God. If you are a Christian, you share their privilege. Chosen by God to follow his Son, to be filled with his Spirit and to herald his good news, you know, or have known, the glory days.

The sons of Korah knew God and they knew suffering; both ran through their family history like threads. But suffering was not only a family trait; it was a present reality for them. The suffering they will go on to describe in Psalm 44 is terrible. They are ashamed, scared, scattered and facing death. These are no super-spiritual saints; they are people who know the grinding and crushing confusion and pain of ongoing suffering. If life is hard for you, they get that, and sing their song alongside you.

We are going to focus on Psalm 44 in this book. We need to begin by placing it in the flow of the Psalms. There are five books of these songs, and the second book begins, in Psalms 42–49, with a sequence of psalms of the sons of Korah. The first book was written by David, so it is appropriate that the second starts with a series by the singers he appointed. Yet the songs of the sons of Korah open with three songs of crushing pain.

Psalm 42 pictures a deer panting for water. This is no cute, soft-focus image, rather it is a picture of frantic desperation. The soul of these singers is on the verge of death, panting for want of God. In the midst of suffering their memories of the glorious days of festivals and feasts at the temple seem like bitter taunts. They are cast down and in turmoil as they compare their current pain with the days when they worshipped God and led his people in praise and thanksgiving. The psalm finishes in hope, a confident expectation that ‘I will yet praise him, my Saviour and my God’ (42: 11). It finishes with hope, but with no end to the suffering.

Psalm 43 finishes with the same hope – phrased exactly the same way. It has no title, but the repeat of the chorus (43:5), which is identical to that in Psalm 42:5 and 11, makes it clear that the sons of Korah wrote this psalm. It picks up the worst pain of suffering, deeper even than the suffering itself – the pain of feeling that God has rejected you.

Psalms 42 and 43 end in hope, but there is no answer, no resolution. They leave us with the pain of suffering, and with the deepest problem of faith: God is in charge, Christ is Lord and so when terrible suffering comes we cannot pretend it has nothing to do with him. We must either run from him – shaking our fist in bitter agony, and hating the Jesus who brought such evil and hurt into our lives, homes, families and hearts – or we must run to him in hope, trust, faith and love. Psalm 44 shows us how we can do this, why we must do this and how Christ himself will hedge us in like a scrum of bodyguards as we flee to refuge in him.

But it is not an easy thing to do. When I meet people who have turned from Jesus because of their suffering or that which they see around them, and who now hate him and deny him and insult him, I think they have grasped something incredibly important. They have seen that Jesus’ power and authority are even over suffering. He could prevent it. This is the truth we would rather duck, but cannot. Atheists and Christians have the same question: ‘How can a good God allow such misery, cruelty, pain and suffering that simply is not our fault?’ We will see, as we work through this psalm, that the answer, at first hard and then beautifully glorious, is that suffering is a season God brings us into in love, and for our blessing. I know you might find that hard to stomach now and I pray that you will smile through the tears as you read on. If you can, why not take a few minutes now to pray that the psalm might be Christ’s way of loving you in the middle of your suffering?

You see, in their confusion and agony of suffering the sons of Korah caught each other’s eye, clutched their instruments, struck a chord and sang. They sang with tears, but they sang to God. And the Holy Spirit gave them words to lead our heavy hearts back to Jesus along with theirs. They raise this most sickening of questions – how can God allow our suffering? – and they answer it.
Notice how the title of Psalm 44 tells us that they answer it in a song: ‘For the director of music. Of the Sons of Korah. A maskil.’ Jesus, our great worship leader, our director of music, leads us in singing it too. It is a psalm that does not shy away from the reality, confusion, shame and terror of suffering. And it is a psalm that takes us to Jesus. Because of the love of Christ for us, we can learn to turn to him, to sing to him and to pray to him, whatever may come. That is why the Holy Spirit wrote Psalm 44 for us. 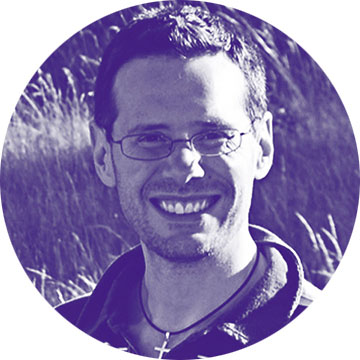 John Hindley is an elder of BroadGrace Church in Norfolk, England and a church planter with Acts 29.