It is a common practice to number the Gospels and to name them by books and say that there are four Gospels. From this practice stems the fact that no one knows what St. Paul and St. Peter are saying in their epistles, and their teaching is regarded as an addition to the teaching of the Gospels, in a vein similar to that of Jerome's introduction. There is, besides, the still worse practice of regarding the Gospels and epistles as law books in which is supposed to be taught what we are to do and in which the works of Christ are pictured to us as nothing but examples. Now where these two erroneous notions remain in the heart, there neither the Gospels nor the epistles may be read in a profitable or Christian manner, and [people] remain as pagan as ever.

One should thus realize that there is only one Gospel, but that it is described by many apostles. Every single epistle of Paul and of Peter, as well as the Acts of the Apostles by Luke, is a Gospel, even though they do not record all the works and words of Christ, but one is shorter and includes less than another. There is not one of the four major Gospels anyway that includes all the words and works of Christ; nor is this necessary. Gospel is and should be nothing else than a discourse or story about Christ, just as happens among men when one writes a book about a king or a prince, telling what he did, said, and suffered in his day. Such a story can be told in various ways; one spins it out, and the other is brief. Thus the Gospel is and should be nothing else than a chronicle, a story, a narrative about Christ, telling who he is, what he did, said, and suffered-a subject which one describes briefly, another more fully, one this way, another that way.

For at its briefest, the Gospel is a discourse about Christ, that he is the Son of God and became man for us, that he died and was raised, that he has been established as a Lord over all things. This much St. Paul takes in hand and spins out in his epistles. He bypasses all the miracles and incidents [in Christ's ministry] which are set forth in the four Gospels, yet he includes the whole Gospel adequately and abundantly. This may be seen clearly and well in his greeting to the Romans [1:1-4], where he says what the Gospel is, and declares, 'Paul, a servant of Jesus Christ, called to be an apostle, set apart for the Gospel of God which he promised beforehand through his prophets in the holy scriptures, the Gospel concerning his Son, who was descended from David according to the flesh and designated Son of God in power according to the Spirit of holiness by his resurrection from the dead, Jesus Christ our Lord,' etc.

There you have it. The Gospel is a story about Christ, God's and David's Son, who died and was raised and is established as Lord. This is the Gospel in a nutshell. Just as there is no more than one Christ, so there is and may be no more than one Gospel...

Yes even the teaching of the prophets, in those places where they speak of Christ, is nothing but the true, pure, and proper Gospel-just as if Luke or Matthew had described it. For the prophets have proclaimed the Gospel and spoken of Christ, as St. Paul here [Rom. 1:2] reports and as everyone indeed knows. Thus when Isaiah in chapter fifty-three says how Christ should die for us and bear our sins, he has written the pure Gospel. And I assure you, if a person fails to grasp this understanding of the Gospel, he will never be able to be illuminated in the Scripture nor will he receive the right foundation.

Be sure, moreover, that you do not make Christ into a Moses, as if Christ did nothing more than teach and provide examples as the other saints do, as if the Gospel were simply a textbook of teachings or laws. Therefore you should grasp Christ, his words, works, and sufferings, in a twofold manner. First as an example that is presented to you, which you should follow and imitate. As St. Peter says in I Peter 4, 'Christ suffered for us, thereby leaving us an example.' Thus when you see how he prays, fasts, helps people, and shows them love, so also you should do, both for yourself and for your neighbour. However this is the smallest part of the Gospel, on the basis of which it cannot yet even be called Gospel. For on this level Christ is of no more help to you than some other saint. His life remains his own and does not as yet contribute anything to you. In short this mode does not make Christians but only hypocrites. You must grasp Christ at a much higher level. Even though this higher level has for a long time been the very best, the preaching of it has been something rare. The chief article and foundation of the Gospel is that before you take Christ as an example, you accept and recognize him as a gift, as a present that God has given you and that is your own. This means that when you see or hear of Christ doing or suffering something, you do not doubt that Christ himself, with his deeds and suffering, belongs to you. On this you may depend as surely as if you had done it yourself; indeed as if you were Christ himself. See, this is what it means to have a proper grasp of the Gospel, that is, of the overwhelming goodness of God, which neither prophet, nor apostle, nor angel was ever able fully to express, and which no heart could adequately fathom or marvel at. This is the great fire of the love of God for us, whereby the heart and conscience become happy, secure, and content. This is what preaching the Christian faith means. This is why such preaching is called Gospel, which in German means a joyful, good, and comforting 'message'; and this is why the apostles are called the 'twelve messengers.'

Now when you have Christ as the foundation and chief blessing of your salvation, then the other part follows: that you take him as your example, giving yourself in service to your neighbor just as you see that Christ has given himself for you. See, there faith and love move forward, God's commandment is fulfilled, and a person is happy and fearless to do and to suffer all things. Therefore make note of this, that Christ as a gift nourishes your faith and makes you a Christian. But Christ as an example exercises your works. These do not make you a Christian. Actually they come forth from you because you have already been made a Christian. As widely as a gift differs from an example, so widely does faith differ from works, for faith possesses nothing of its own, only the deeds and life of Christ. Works have something of your own in them, yet they should not belong to you but to your neighbour.

So you see that the Gospel is really not a book of laws and commandments which require deeds of us, but a book of divine promises in which God promises, offers, and gives us all his possessions and benefits in Christ. The fact that Christ and the apostles provide much good teaching and explain the law is to be counted a benefit just like any other good work of Christ. For to teach aright is not the least sort of benefit. We see too that unlike Moses in his book, and contrary to the nature of a commandment, Christ does not horribly force and drive us. Rather ... he teaches so gently that he entices rather than commands. He begins by saying, 'Blessed are the poor, Blessed are the meek,' and so on. And the apostles commonly use the expression, 'I admonish, I request, I beseech,' and so on. But Moses says, 'I command, I forbid,' threatening and frightening everyone with horrible punishments and penalties. With this sort of instruction you can now read and hear the Gospels profitably. 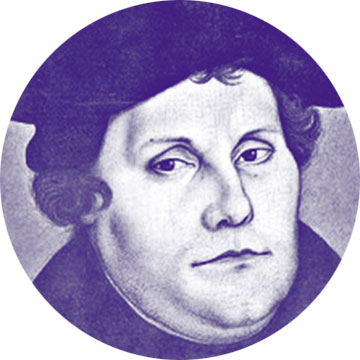