This article is an extract from the Union/10OfThose book, Unbreakable, by Andrew Wilson.

Everybody knows that Jesus was killed. What many people don’t know is that, before they eventually succeeded, there were first several failed attempts to kill him.

It’s winter, and Jesus is in Jerusalem.[i] He keeps saying provocative things: things which only Israel’s God could truly say, like, ‘I’m the light of the world’, and ‘I’m the bread of life’, and ‘I’m the good shepherd’, and even ‘Before Abraham was, I am.’ One day, the Judeans gather round, like journalists swarming around a politician in trouble, and push him for a straight answer – so he gives them one. ‘I and the Father are one,’ he says.

That’s blasphemy, they think. Quickly, they reach down for stones to throw at him: bits of rock, cobbles off the street, whatever is available. ‘Not because of the works you’ve been doing,’ they say – although they don’t like those either – ‘but because you, a mere man, are claiming to be God, you have to die.’

But Jesus is ready for them. ‘Have you read your Bibles recently? Psalm 82:6, for instance? If the scriptures call kings “gods” – and the scriptures are the word of God, and they are unbreakable – then what are you getting so hot and bothered about? In a nutshell: if you’re saying I’m wrong, then you’re saying the Bible is wrong. But the Bible is unbreakable, right? It’s the word of God.[ii] So you should probably back off.’

It’s not just a clever line, plucked out of nowhere to win an argument. Right at the start of his teaching ministry, Jesus made it clear that he hadn’t come to ‘break to pieces’ (or ‘abolish’) the Law, and that anyone who ‘broke’ it would be called least in the kingdom.[iii] The unbreakability of Scripture is foundational, both for Jesus and for the Judeans he’s talking to: since God has spoken through Scripture, then any argument that leads to the conclusion that Scripture is broken in some way, no matter how convincing it sounds, must be wrong. End of story.

That’s hugely challenging. Many of us, when faced with a biblical difficulty – and there are plenty of those! – conclude that the scriptures are broken. Maybe this didn’t really happen. Maybe God didn’t really say that. Hardly a day goes past without some Christian, somewhere, apologising for something the Bible says, and muttering something about it being a human book, complete with muddles and mistakes.

But if the scriptures are the unbreakable word of God, as Jesus seems to have thought they were, then a different approach is needed. Maybe it’s my interpretation, or my assumptions, that need challenging. Maybe there is something I don’t know. Maybe the answer is in there, and I just need to look a bit harder.

Maybe I’m the one who is broken, rather than the Bible. 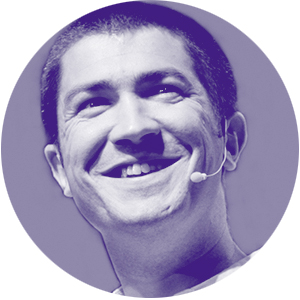 Andrew Wilson is an elder at Kings Church in Eastbourne. He is currently studying for a PhD at Kings College London, and is the author of Incomparable and Unbreakable: What the Son of God Said About the Word of God.